As executive head of the United Nations Democracy Fund (UNDEF), Annika Savill manages a United Nations secretary general's trust fund that strengthens the voice of civil society, promotes the rule of law and human rights, and encourages the participation of all groups in democratic processes.

Initiatives range from empowering Syrian women refugees in frontline states to working with civil society to support the peace process in Colombia; from strengthening democratic practices in Ukraine to motivating marginalized youths in Tunisia. Since it was established in 2006, UNDEF has disbursed over $160 million to projects covering over 100 countries in post-conflict, transition and consolidation phases of democratization.

Before joining UNDEF, Ms. Savill served in the executive office of the U.N. secretary general from 1997 to 2008, working under Ban Ki-moon and Kofi A. Annan as the secretary general's speechwriter and a senior member of his communications team. Prior to joining the United Nations, she had a 15-year career as an international journalist, serving with The Associated Press, Reuters and The Independent in London, where she was a founding member and diplomatic editor.

Ms. Savill has written about democratic processes in a number of societies in transition. She is the winner of two UN 21 Awards for organizational innovation. 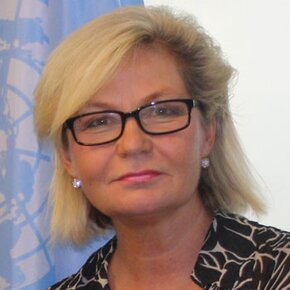