Born in 1987 as a Palestinian refugee in Lebanon, Mr. Khazaal grew up in the Bourj el Barajneh camp in Beirut. At a young age, he participated in several local plays and starred in the Palestinian film “Sugar of Jaffa.”

He later immigrated to Canada. As one of four recipients of the Global Leader of Tomorrow Award in 2005, he studied at York University in Toronto, graduating in 2009 with a B.A. in international development studies.

Mr. Khazaal worked as a public speaker and web show host before publishing his first novel, “Confessions of a War Child (Part One)” in March 2013; followed by part two, subtitled “Lia,” in 2014; and the third novel in the trilogy, subtitled “Sahara,” in 2015. In 2017, he released his fourth novel, “Tale of Tala.” Witnessing the blast at the port of Beirut, Khazaal penned his 5th novel OUCH! a memoir with a twist in 17 days. An intense journey of pain and psychological conflict, the novel was released on October 17, 2020.

Mr. Khazaal is an advocate for refugees and aspiring young writers. A savvy communicator, he has spoken via a number of platforms and at events worldwide.

In 2015, Esquire Middle East named him Man of the Year, and in 2016, he was ranked first by Arabian Business magazine in the 100 Most Powerful Arabs Under 40. 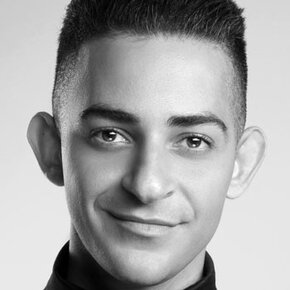