From May 2011 to January 2018, Mrs. Bouchamaoui was the President of UTICA, the Tunisian Confederation of Industry, Trade and Handicrafts, first woman elected to this position.

In 2013, with the Tunisian General Union of Lab or (UGTT), they launched the initiative of the National Dialogue, joined by the League of Human Rights and the Tunisian Order of Lawyers, they formed The Quartet, which was awarded the Nobel Peace Prize in 2015.

Identified as one of the most influential businesswomen in Africa, she was awarded the “Best Businesswoman of the Arab World” in 2013, under the auspices of the G8 Deauville Partnerships. In January 2015, the Tunisian President, Mr. Beji Caid Essebsi made her Grand Officer of the Order of the Republic, and His Majesty, King Carl XVI Gustaf of Sweden, decorated her with the Royal Order of the Polar Star in November 2015. She also received in December 2015, the “Legion d’Honneur” from the French President, Mr. François Hollande.

Shareholder and director of the Hedi Bouchamaoui Group (HBG Holding) since 1988, she is also involved for many years in Foundations. She has joined the Foundation "Business for Peace", the Foundation "Cultura de Paz", "Global Hope Coalition" and recently "Leaders for Peace".

Additionally, on October 27, 2017, Mrs. Bouchamaoui was elected Vice-President of the United Nations' European Center for Peace and Development - University for Peace in Belgrade and joined the Board Members of University of Peace of Costa Rica.

Mr. Emmanuel Macron, President of the French Republic, appointed Mrs. Bouchamaoui as President of the Steering Committee of the Summit of the Two Shores and invited her to be a member of the Consultative Council for Gender Equality.

She intervenes for political conflicts or within companies, as well as to initiate dialogue with Unions. 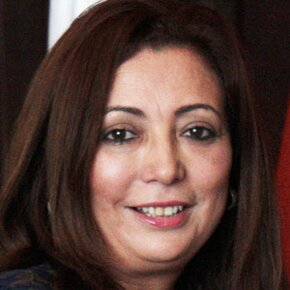