Chairperson, Qatar Museums Board of Trustees

Her Excellency Sheikha Al Mayassa bint Hamad bin Khalifa Al Thani has played a pioneering role in the fields of culture, education and outreach, spearheading and supporting a number of local and international organizations.

As chairperson of the Qatar Museums board of trustees, Sheikha Mayassa guides the vision for future museums, cultural institutions and heritage sites in Qatar, with the aim of transforming the country into a vibrant cultural center in the Middle East and beyond.

Sheikha Mayassa graduated from Duke University, North Carolina in 2005 where she was vice president of the Duke International Association, vice president of the university’s HIWAR group promoting political dialogue, and a delegate for the 2001-2002 Model United Nations. She went on to complete postgraduate studies at Columbia University.

Named by Forbes among the most powerful women in the world, Sheikha Mayassa is also the head of the Doha Film Institute, Qatar’s first international organization dedicated to film financing, education and production.

In addition to her work on cultural initiatives, Sheikha Mayassa is the chairperson of Reach Out to Asia, or ROTA, a philanthropic nongovernmental foundation dedicated to assisting victims of natural disasters, and aiming to improve the quality of primary and secondary education in Asia. 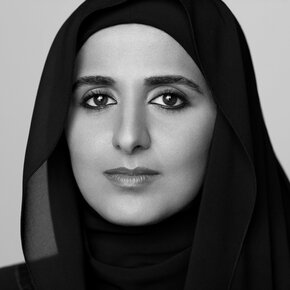